How NOT to Advertise to the Male Species

I feel particularly powerless when I am constantly subjected to stereotypical advertising geared toward women. Yes, I am a woman, but I do not have an obsession with buying shoes, I can’t stand the color pink, and I don’t like gossiping, going to beauty salons or the myriad other things typically associated with the female race. I find this kind of advertising outdated and lazy. Am I supposed to feel better that men are now being subjected to the same outdated, lazy and stereotypical advertising that women have been subjected to for the last 20 years?

Men are people, too. At least I’m pretty sure. They are individuals with individual needs and wants, and advertisers who continue to take a one-size-fits-all approach to their messaging will lose out in a big, embarrassing way.

With that in mind, here are a few ways advertisers should NOT market to men:

Treating Men as if They Were Stupid

A popular trend in commercial advertising is the "dumb guy" premise. You know, those ads where men – usually well-intentioned but completely inept husbands - are unable to complete the simplest household tasks that involve either cleaning or preparing food and are saved by their much more intelligent wives.

Here’s a Discover Card commercial where the husband not only forgot to pay a bill, he also bought a puppy instead of milk like his wife asked him to. What a dumb oaf! 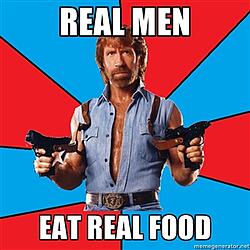 Even more prominent than the "dumb guy" ad is the "REAL men use-eat-buy-like..." formula. The media is littered with these peer pressure-type appeals and they are condescending and idiotic.

Here’s a commercial from Dodge that paints a pretty foul picture of what a "real man" is supposed to be. According to the geniuses behind this ad, real men don’t believe in good nutrition, cleanliness or sharing household responsibilities. If I were a "real man" I’d throw my beer, beef jerky and Sports Illustrated magazine at the TV every time this commercial came on.

Perpetuating the Myth That Men Are Inept at Childcare

I think one of the saddest marketing misses is portraying men as completely incompetent when it comes to rearing their own children. I know plenty of dads who not only love the responsibilities that come with fatherhood, but are also capable of changing diapers, fixing meals and helping with homework.

But too many advertisers take the easy route of portraying men as well-intentioned simpletons who need parental supervision from their wives lest they accidentally leave their kids at a monster truck rally or fill their sippy cup with beer.

Here’s a Hanes commercial where the idiot father is up to his usual shenanigans and the mother comes in and saves the day (not before rolling her eyes and essentially calling her husband stupid!).

Heaven forbid a man just eat a bowl of soup, that soup has to tackle a "man's" hunger and list beer and bacon as the first two ingredients. Really? This is the equivalent of me being expected to buy yogurt that contains the latest, greatest weight loss ingredient (so I’ll be thin 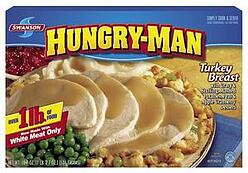 enough to attract the right man) wrapped up in a pretty, periwinkle container.

When did inanimate objects like food become masculine and feminine? I know plenty of male vegetarians and women who eat steaks as big as their heads, but according to Madison Avenue, certain foods are "manly" and others are "chick foods."

Check out this Burger King commercial where a guy considers fancy French food "chick food,"leaves his confused girlfriend at the table and joins his fellow cavemen – er, friends -  out on the street to eat guy food in protest.

As he points out, the days of marketing to men by appealing to their macho side or using hot chicks to show off a product are gone. Emotional marketing tactics can be a powerful way to endear men to products.

Here’s a perfect example of an advertisement that is geared toward men and creates an emotional response for the viewer.

Unlike the typical commercials where the father is an idiot, this Subaru ad shows the anxiety a father feels right along with his little girl on her first day of school. Subaru didn’t go the easy or lazy route; they realized men are individuals with strong emotional lives and created a campaign that reflects this.

Whether you’re advertising online, in print or on TV, the marketplace has become increasingly competitive. If you want to succeed, you’ve got to stop creating subpar advertisements that are irrelevant and stereotypical. If you want to have men connect with your product or service, don’t create ads that treat them like idiots, bully them into being more "manly,"patronize them, make them feel less of a parent or ignore their emotional lives.

Advertisers can and should be doing better. After all, this is the 21st century; if we can genetically select our babies and create artificial limbs with a 3D printer, surely we can create advertising that doesn’t depend on stereotypes and delves a little deeper into humanity. And is it too much to ask for a superior bread product that stands up to all kinds of moisture?