Actor James Ellis once said, “Newspapers are the world’s mirrors”.  Newspapers reflect global ideas and events in an accessible and readable way. Even with digital media on the rise, newspapers are still one of the most popular ways to learn about current events. In addition to current events, businesses from all around the world continue emphasizing advertising in newspapers. Canada specifically, has a booming newspaper industry. In fact, newspaper readership in Canada today is higher than it was in 1950. What does this mean for advertisers? Advertising in Canadian newspapers is a must, eh? Check out the graph below to see how see how the newspaper readership in Canada has changed during the last six decades. 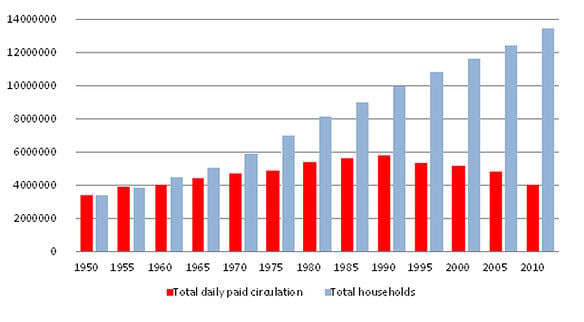 Newspaper readership hit a peak in 1990 and made a slight decline during the next two decades. Despite this slight decline, it’s critical to remember newspaper readership in Canada is still strong. And while paid circulation might be decreasing, based on the graph above, it’s more important to note household reach is actually increasing. Newspapers have never made their money on subscriptions, it’s always been an advertising driven business. With the household reach in Canada growing, newspapers are increasing the pool of consumers advertisers can reach through this medium. Because of this, it’s important to understand the trends that accompany the Canadian newspaper industry. Some of these trends include:

Three popular Canadian newspapers reduced the size of their newspaper in 2007. These newspapers included: The Globe and Mail, National Post and The Toronto Star. A smaller newspaper may offer less space for advertisements, but it also increases its popularity because consumers enjoy smaller sized papers.

In 2007, The Toronto Star, one of Canada’s most popular newspapers was one of the first newspapers in the world to officially launch sectional pricing. Sectional pricing is pretty self-explanatory; each section has a different price allowing advertisers to target a specific demographic.

Modular advertising, or using a universal ad size is something a lot of newspapers are transitioning into or have already implemented. In Canada, The Toronto Star started this revolution and offers 24 sizes. Several other Canadian newspapers followed the Star’s lead and have started using modular advertising.

Newspaper Advertisements are most trusted source

According to a 2010 study by Totum Research Inc., advertising in newspapers is trusted more than any other medium. Six out of ten Canadians (61%) say they'd rather look at the ads in a newspaper than watch advertisements on TV.

The bottom line is, a majority of Canadians read the newspaper. Understanding how the Canadian market differs from the market in the U.S. is crucial when advertising in Canadian newspapers. Like anything, it’s all about understanding your target, determining where they are and the best methods to reach them. Looks like when it comes to Canada, newspapers and newspaper websites are still key. 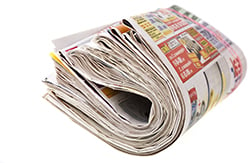