Is Crowdsourcing Your Advertising A Good Idea?

Crowdsourcing (noun): The practice of obtaining needed services, ideas or content by soliciting contributions from a large group of people, especially from the online community, rather than from traditional employees or supplies. Not to be confused with crowdsurfing.

Okay, so now that we’re all on the same page, is it a good idea for your company’s next advertising campaign? The answer is: it depends. For some brands, crowdsourcing is easier to incorporate into ad campaigns than others. If Ben & Jerry’s were ever interested in crowdsourcing new ice cream flavors or campaigns, I’d be the first one to jump on board. What a delicious project that would be! (Note: Less than an hour after drafting this blog post Twitter told me Ben & Jerry’s was currently running a “Design a T-Shirt for Ben & Jerry’s Ice Cream” campaign. It looks like I missed the boat on that one.) Other brands with strong followership and loyalty, such as Apple, would probably have a large response if ever they 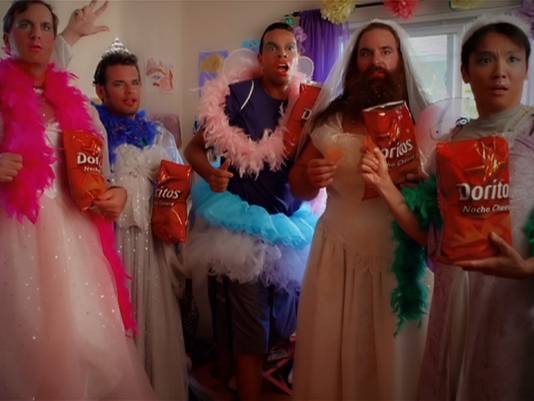 decided to embark on the journey of crowdsourcing. About 20 percent of the advertisers who had spots in this year’s Super Bowl integrated it into their campaigns including Doritos, Pepsi, Pizza Hut, and Audi, to name a few. Even Jimmy Fallon got involved in the crowdsourcing effort for Ford’s Lincoln campaign when he used his Twitter followers to #steerthescript of the ad. Which Super Bowl XLVII advertiser did it best and why? Tell us in the comment section below.

Let’s consider the benefits of this advertising tool. Crowdsourcing isn’t new to advertising, but social networks have brought it to the forefront once again. Because of their social nature, crowdsourced ads can spread like wildfire while further increasing brand visibility and word of mouth marketing. This advertising practice can lead to fresh ideas and ingenuity from contributors that propel the brand forward. Companies such as Zooppa and Tongal have built their business around the idea of crowdsourcing and would be a great place to start if you are interested in learning more about this growing advertising solution. The key to crowdsourcing success, according to Zooppa, is creating clear direction in your creative brief. With this guidance you can steer your campaign in the direction you want it to go while at the same time opening the opportunity for creativity.

Now, let’s take a look at the other side of the coin and consider the potential drawbacks of utilizing crowdsourcing as a means to advertise to your customers and prospects. Of course, you run the risk of losing brand positioning when relying on strangers to take your concept and run with it. Also, it will take time and energy to sift through the creative submissions you receive, but if you are a well-known company with a great reputation, chances are you’ll get some pretty good ideas from your fans. For example, Nabisco’s “Daily Twist” campaign for Oreo was right on the money. To commemorate Oreo’s 100th anniversary, the company released one new cookie design each day for 100 days. Oreo lovers were involved in selecting the theme for each day’s design, as well as crowning the winner.

What are your thoughts when it comes to crowdsourcing your advertising? For those of you who have experimented with it, what has been your experience? Let’s start a dialogue in the comments section below. Also, if your brand isn’t Oreo or Pepsi, but more focused on local markets, how can you efficiently use crowdsourcing? Often local advertisers have smaller budgets and resources, but the importance of reaching local audiences is becoming clearer every day. If you’re interested in learning about the benefits of local advertising, download our research report titled “Ten Benefits of Local Advertising.”