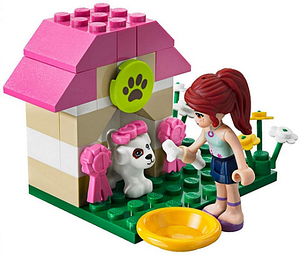 When you were a kid did you ever play with Legos? Or as a parent do you buy legos for your son or daughter? Lego launched their Lego Friends toy line, which was geared towards young girls in December 2011. Lego hoped to create a toy line young girls would want to play with as well.

However, this gender marketing move of theirs caused two women to be upset by their pink colored blocks and a character who wanted to be a fashion designer. Stephanie Cole and Bailey Shoemaker-Richards started a petition against this line on Change.org. Both women felt the Lego Friends toy line pushed sexist gender roles onto young girls. The 55,364 signatures on the petition caught the attention of Lego which then invited Cole and Shoemaker-Richards into a private meeting.

Lego satisfied the women’s concern of having a sexist sterotype by possibly creating a new character based off the character Korra from the anime-TV series, Avatar: The Last Airbender. Apparently, these two women believe a character that can cause physical harm is more appropriate for little girls compared to Lego Friends other characters: Mia, an aspiring vet; Emma, who owns a design salon and enjoys martial arts; Andrea, the musician; Stephanie, who aspires to be a journalist, editor, or party planner; and lastly, Olivia, who hopes to be a scientist or an engineer.

As a young girl growing up, I would have loved to play with these Lego Friends. Lego’s spent four years doing research and more than $1 billion creating Lego Friends after a few failed attempts to create a toy line for young girls. The product they have come up with is great and appeals to young girls. The toy line allow girls to have the same fun as Barbie and Polly pocket and combines Lego’s ability to create and build. In 2011, Lego saw 90% of its sales come from boys. Since the introduction of the new line, things have already begun to change. Through the first quarter of 2012, the company saw their sales to girls increase to 25% thanks to the new line and focus on the female market.

What do you think? Do you think Cole and Shoemaker-Richards were right in questioning Lego’s gender marketing?