Today’s the Fourth of July, the day we celebrate America’s Independence. And with that I was expecting to find all sorts of patriotic-themed advertising campaigns as companies try to tie themselves to freedom, life, liberty, the pursuit of happiness, and the bald eagle. Turns out I shouldn’t have set up those expectations because July 4 isn’t when companies release those ads in an effort to pull at our heartstrings and convince us to buy because of their love for America.

Let’s face it, if you’re reading this today you’re not in the mood for any sort of heavy lifting. It’s a vacation day, or at least it is for most of you. You might be looking for something to pass the time as the kids pack up their toys or your significant other gets the food and beverages ready for your Independence Day barbeque. In an effort to keep your day relaxing, I pulled together some of the most patriotic ads of recent years and looked at when they were released. Here’s a hint: it’s during one of the most-watched television events of the year, not as we’re all prepping for fireworks.

As expected, patriotic advertising campaigns were elevated during the past 12 years. Since September 11, advertisers have been trying to balance the ‘we’re for America,’ mindset without coming off as trying to capitalize on a tragic event. For instance, take a look at this Budweiser ad from the 2002 Super Bowl, the first major television event following the September 11, 2001 attacks:

(Note: this ad originally aired during the 2002 Super Bowl and was remade and re-released recently, which is why you see ©2011 at the beginning and the Freedom Tower at the end.)

What you’ll notice is this commercial’s not about beer. It’s not about partying and having a good time with the connotation that in order to do that you need to have Budweiser at your party. It’s about a company showing its support for the country that helped build it. Personally I’m not a huge fan of Anheuser-Busch products, but they put together some great advertising. Take a look at this ad, which came a few years later, again during the Super Bowl:

Now if that didn’t make you well-up, just a little bit, you either don’t have a heart or watched the wrong YouTube clip.

Believe it or not, Anheuser isn’t the only company that has gone down the pro-America road when it comes to putting together their campaigns. Car companies have for decades tried to convince the locals that by purchasing their vehicles, they’re supporting our country. One of the latest was from the 2012 Super Bowl, featuring Clint Eastwood:

This one got mixed reviews, with some people looking for deeper meaning beyond the ‘Buy American’ message Chrysler was after. You can decide for yourself whether or not there’s a pro- or anti-Obama message in there and the significance of using Eastwood in a commercial discussing America.

What it comes down to is this: while there are a number of advertising campaigns featuring pro-America and patriotic messages, they don’t all come out around July 4. Instead, as it should be, they are released for the largest audiences when the most people are paying attention. After all, the goal of any successful advertising campaign is to elevate brand recognition or value or drive people to purchase a product or service. And people are much more likely to be watching for these advertising campaigns on an early February Sunday than the middle of summer.

If you’re looking to build effective advertising campaigns, we have a couple tools for you. The first is the Smart Marketer’s Guide to Local Digital Advertising and the other is a whitepaper featuring the Four Reasons the RFP Hurts your Media Buying. Give them a read, and you’ll be better prepared for your next campaign. 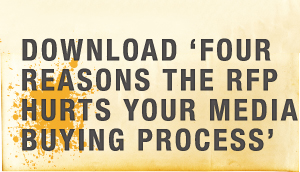