The Emergence of Mobile Coupons in Digital Advertising

Americans love their coupons. Sometimes, a little bit too much.

Craziness aside, a money saving opportunity has and will always be a motivating incentive to many. A dollar saved is a dollar earned, right? Before this past decade, much of the general population relied on newspapers, magazines and inserts to get their hands on the catchy little boxes with perforated borders. I’m sure many of you remember waking up to the sound of your mother snipping every last 2-for-1 coupon out of the Sunday newspaper at some point in your life. Here in 2013, scissors are still used to clip out the majority of coupons in households across the country. However, not all coupons today are simply cut right out of the local fish wrap. Consumers today are also finding coupons with just the tap of a screen.

As digital devices continue to become further integrated into everyday life, consumers are looking to smartphones, tablets and the Internet to assist with their shopping experience. On the flip side, marketers are beginning to take advantage of this phenomenon by placing an extra emphasis on digital platforms in direct response advertising campaigns. While the majority of coupon junkies still cash in coupons found in circulars and print publications, a recent eMarketer report noted 92.5 million people in the United States used a digital coupon in 2012. Steady growth in digital coupon users should put that number past the 100 million mark by 2014, according to the same report. To put that number in perspective, that’s nearly one-third of the total U.S. population.

The main reason marketers expect the number of digital coupon users to grow is because of the outstanding promise and potential of mobile coupons. Just 16.3% of the nation’s current mobile phone users used mobile coupons in purchases in the U.S. in 2012, according to eMarketer, but that number is expected to rise quickly. As a record number of consumers make the switch to a smartphone in the coming months, eMarketer predicts that by 2014 one in four mobile phone users will redeem a coupon they accessed on their mobile device. 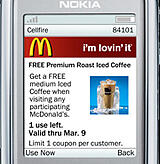 going forward. According to MediaPost, a recent study concluded “51% of consumers were more likely to enter a store and buy something if they received a coupon on their mobile device while near the store.” Additionally, 63% of those surveyed said they would be more likely to buy something when they “received a coupon on their mobile device when inside the store.” Such geo-targeted advertising methods take away whatever remaining struggle there was to searching for coupons; it’s a rough day when coupons are sent straight to you on your phone while you’re walking down the cookie aisle.

Because mobile coupons can be accessed anywhere at any time, consumers never have to worry about forgetting a coupon at home or drowning one in the wash. A mobile coupon’s ability to be with you at all times of the day has helped achieve a 10% redemption rate, compared to a 1% redemption rate in traditional print coupons. The logic is simple: The easier it is for a consumer to access a coupon, the more likely it is they will use it in a purchase. Rather than spending time paging through print coupons at home, consumers can gain access to a coupon with the simple swipe of a finger while wandering through Target.

While digital coupons are sure to be an integral part of marketing campaigns in the future, there’s no reason to believe print coupons will be leaving the mix any time soon. At Mediaspace Solutions, we believe integrating print and digital advertising platforms can maximize the reach of your campaign and help you find new markets. Check out our eBook titled The CMO’s Guide to Integrating Print and Digital Media to learn how an integrated marketing campaign can help your business.