See the Changes in Newspaper Buying Through the Holiday Party

It’s that time of year again, when everyone starts reviewing company policy in the days

leading up to the holiday party. Admit it, you’ve given it a perusal to ensure you stay within the boundaries once the libations start flowing. While holiday parties in some industries have no doubt become more loose and relaxed, others have gone the other direction in an effort to class up the annual event and keep everything on the up and up.

Think for a minute about the publication industry. What’s the first picture that comes to mind when you think about the holiday party at a newspaper? Here is mine: a bunch of men in suits and ties standing around drinking scotch and probably smoking cigars.  These are the executives who remember the heyday of newspapers, when the only media they were competing against were radio and television. In our minds the people discussing politics and the news of the day (which they of course read in their local daily) are the exact target of the newspaper and the people many of us think are the only ones reading anything printed on an industrial press. But that’s not the reality. At least it hasn’t been since the 1960s or 1970s.

Today the holiday party at a newspaper buying service is a bit livelier than that. As is daily life within the media buying agency, even one focusing on print. Take Mediaspace for example. Our average age within the agency is hovering near 28. Yet, at the same time, these folks are experts on the ins and outs of newspaper buying, and experienced in delivering results to each and every one of our clients. Part of the reason for this is that like the image I get when I think about the current newspaper holiday party, the perception of newspapers is wrong. While the circulation numbers have dropped drastically since 2007 and in turn the advertising revenue, things are becoming more stable. In some markets, such as the Twin Cities, publications like the Star Tribune are actually seeing circulation increases. Consistently.

You know that whole idea about perception being reality, turns out it might not be the case anymore. Take a look at what’s happening at The New York Times. They are predicting an increase in digital ad sales. If you know anything about the printing and publishing industries, you know there’s a follower mentality. Also, The New York Times is one of those papers the rest of the industry takes a look at and is willing to follow, as it should be. This means we can expect digital ad revenue at other publications to follow suit as publishers work to provide advertisers the solutions they need to deliver their messaging and drive people to action. 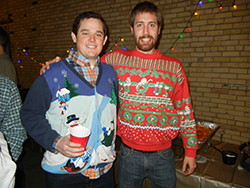 So let’s get back to the holiday party example for a minute. The Mediaspace holiday party is tomorrow and I can guarantee you there won’t be one suit and tie, unless it’s a joke or a significant other who wasn’t fully informed by the employee. Scotch? Maybe. But we also might have tippy-cup. Plus, the discussions around politics and the news of the day will be replaced with real conversations about people and developing relationships with co-workers because that’s what people do today in the age of over-sharing and over-exposure. Hey, I’m just being honest.

While newspaper buying has certainly changed and the game has gotten a bit more complicated, newspapers, whether in print or digital forms, are still driving action and getting consumers off their seats due to the advertising happening on the page. Advertisers who are using multiple media, such as print and digital, are benefitting the most when their campaigns work together. Take a look at how you should be developing your campaigns with our eBook on integrating print and digital advertising and let us know when you’re ready to kick one off. Feel free to call Monday. We should be recovered by then.

1. Media Buying Tips from the Cast of Friends – Part 1

2. Media Buying Tips from the Cast of Friends – Part 2